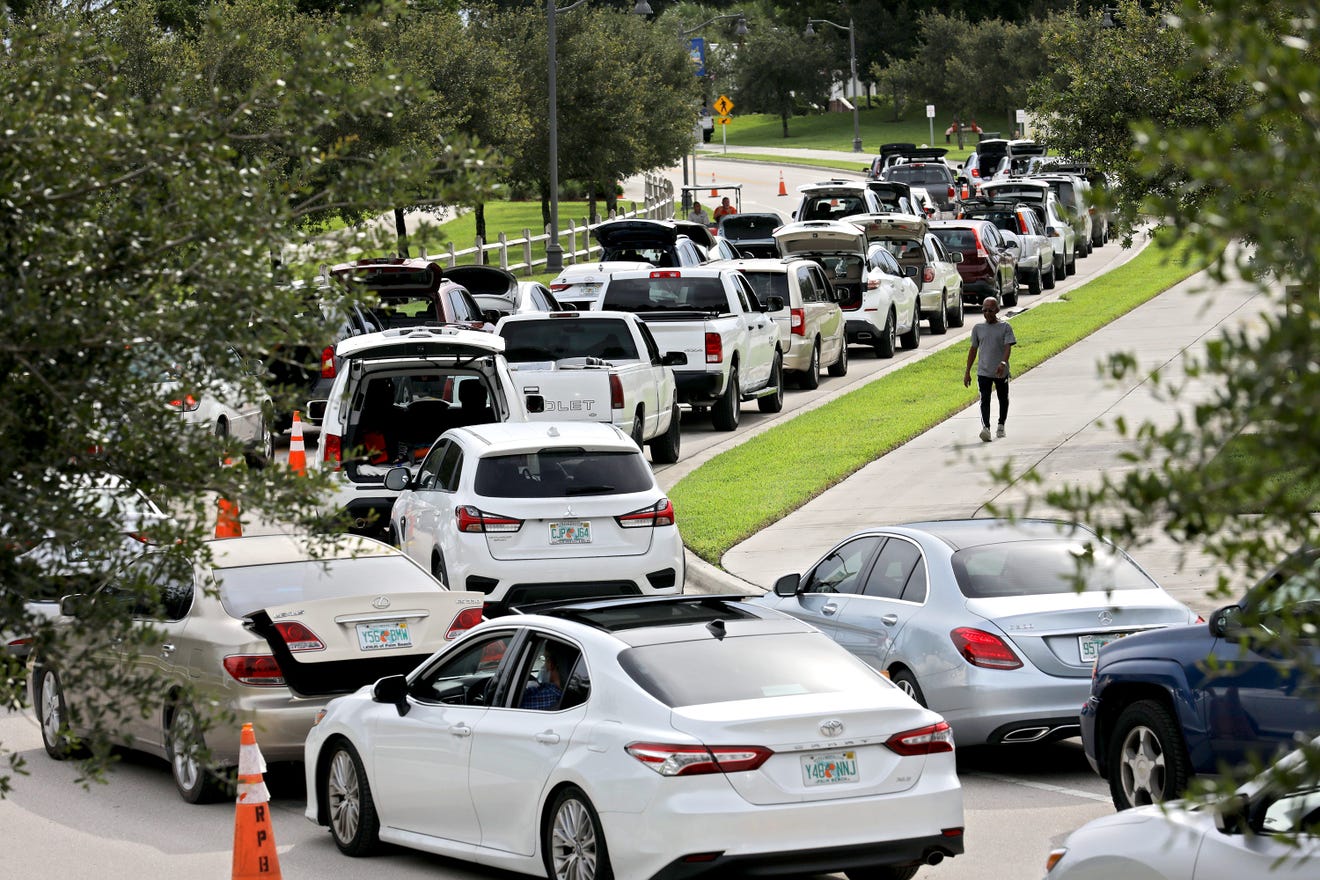 ROYAL PALM BEACH — Volunteers from Feeding South Florida can hear Terry Hibl before they can see him in the winding line of cars that forms every Wednesday morning at Commons Park in Royal Palm Beach.

While the 1970s rock hits Hibl, 74, blares from his Kia van has earned him the nickname “Music Man” and makes volunteers smile, he says the work Feeding South Florida does for the community makes him smile in return.

With windows rolled down and trunks open, a variety of about 600 vehicles inch their way through the park on Poinciana Boulevard from 9 to 11 a.m. as they wait for volunteers to load their trunks with grocery store staples.

Since April 2020, Feeding South Florida has held 61 drive-throughs and has distributed 2,884,800 pounds of food — equivalent to 2.4 million meals or 650 Kia Sedonas — in Royal Palm Beach, according to an organization representative.

Along with the car seats, bumper stickers, and parking permits volunteers often see, their conversations with recipients tell them whom the food drive is helping: the elderly, children, single parents, veterans, young adults and neighbors.

Jeff Hmara, the village vice mayor, has been volunteering with Feeding South Florida since the launch of the food drives. He believes the organization’s efforts have transformed people within the village to become more aware of what others go through.

“It’s an eye-opener. … There are a whole bunch of people out there who we don’t know are in a position of need,” he said. “Just a little sampling of that gives an indication that this is the right thing to do.”

Residing about five minutes away from Commons Park, Hibl has joined the line every Wednesday for the last two months and says Feeding South Florida has helped him cut costs, as he relies on income from Social Security and his wife’s job.

“I am already used to getting along with what I have, but the little bit does help,” he said.

This past week, he and hundreds of others left the park’s loading stations with a block of butter, a gallon of milk, a bag of peas, a whole uncooked chicken, a box of elbow macaroni, a bag of corn on the cob, a bottle of grapefruit juice, a head of cabbage, a carton of eggs, a box of mixed vegetables, a block of cheese and a bag of dragon fruit.

‘The face of hunger could be anybody’

Food insecurity is the measure of the availability of food in a neighborhood and one’s ability to access it, according to Feeding America, a nonprofit network of more than 200 food banks around the country.

Feeding South Florida is a Feeding America partner. It has served 25 percent of Florida’s food-insecure population since 1981 and has served Palm Beach County since 1989 by providing immediate access to ready-to-eat food or ingredients that can be used to prepare nourishing meals, according to the organization’s site.

About 1.1 million people in South Florida are food-insecure, including about 167,200 in Palm Beach County as of May 2021, according to Feeding South Florida, whose reach extends through Broward, Miami-Dade and Monroe counties.

Food insecurity is often accompanied by poverty. The Department of Health and Human Services says a family of four lives in poverty if its income is $26,200 or less.

About 6,000 residents in Wellington and Royal Palm Beach lived in poverty as of July 2019 among a total of about 171,000 in Palm Beach County, according to a five-year estimate by the U.S. Census Bureau. Slightly more than 20,000 county residents who lived in poverty at that time received federal SNAP benefits.

Sari Vatske is Feeding South Florida’s executive vice president. Her ties to the agency began when she was 10, witnessing food insecurity in the aftermath of Hurricane Andrew in 1992. She said her experiences have taught her hunger knows no age, race or religion.

“Most people, when they think of hunger and food insecurity, may think of the homeless population,” she said. “But the reality is that it could be working people, it’s the unemployed, it’s veterans, it’s children, seniors. The face of hunger could be anybody.”

The pandemic highlighted this point. About 40 percent of the people who turned to Feeding South Florida last year were doing so for the first time, according to Vatske. “People really saw the vulnerability of how people are just one paycheck or emergency away from needing to access a food bank’s support,” she said.

After the COVID-19 outbreak closed businesses, caused people to lose their jobs and forced them to choose between paying bills and buying groceries, Feeding South Florida expanded its efforts to end hunger in Palm Beach County’s western communities by setting up a distribution center at the park, and at the Mall at Wellington Green.

Lou Recchio, Royal Palm Beach’s director of parks and recreation, says this is the first time Commons Park, which typically only serves a recreational purpose, has been used as a food distribution site. In June, the village’s signature outdoor space also doubled as a Pfizer and Johnson & Johnson vaccine distribution site every Friday night.

By the end of June 2021, Wellington concluded its time as a distribution center and Royal Palm Beach was to follow. But Recchio says even though the community is making a return to normalcy, people still need help getting food on the table.

Each week about 600 cars show up, Recchio said, and as long as people keep showing up, volunteers will provide food to everyone, regardless of their age, race, or vehicle.

“We don’t judge anybody. There will be people coming in with Cadillacs and BMWs and whatever they’re driving,” he said. “We don’t ask questions. Everybody needs somebody sometimes.”

Volunteers practice service above self

Ceasor, 51, is a leader of the American Association of Caregiving Youth, which supports those ages 6-17 who care for their chronically ill, elderly, injured, or disabled relatives.

The values learned from her family and Bible verses such as Luke 12:48 — “Much will be demanded from everyone who has been given much, and from the one who has been entrusted with much, even more will be asked” — have allowed Ceasor to volunteer out of a sense of duty.

She says the satisfaction of helping others hands-on has kept her coming back to the site every week since the program started. “I look forward to this every Wednesday morning,” she said while handing out food to cars.

She says Hmara, her neighbor, first told her about Feeding South Florida’s efforts.

What started off as a program run by village employees and people who wanted to find something to do during the national lockdown, Hmara said, has turned into a community effort to end hunger close to home.

“Everything shut down. … This didn’t,” he said.

Although drive-throughs may seem like the perfect match for Commons Park, they are not Feeding South Florida’s preferred method of food distribution.

Vatske said drive-throughs came to be during the pandemic when about 40 percent of partnering agencies closed, health concerns for volunteers — many of them age 65 and older — rose, and there was less room to store perishable items.

“It was meant to provide stability and certainty on a schedule for people in a time when that didn’t otherwise exist,” she said.

She said Feeding South Florida’s preferred method is through the food bank’s network of more than 300 partner agencies, and food never goes to waste. About 90 of them are in Palm Beach County.

More than 98 percent of all financial and food donations given to Feeding South Florida, through partnerships with more than 500 retail stores, are put back into the community. The remainder is used for fundraising efforts.

People can also access food directly through Feeding South Florida’s on-site pantry at its Boynton Beach warehouse, as well as a home-delivery program.

During school break, the nonprofit has provided a summer meal service to households with children who rely on school meals. Once school starts in the fall, it will reopen its school pantry, which has been put on hold for over a year.

“Feeding South Florida believes in serving with dignity, and providing a choice,” she said. “The whole idea is to create a store environment for people.”