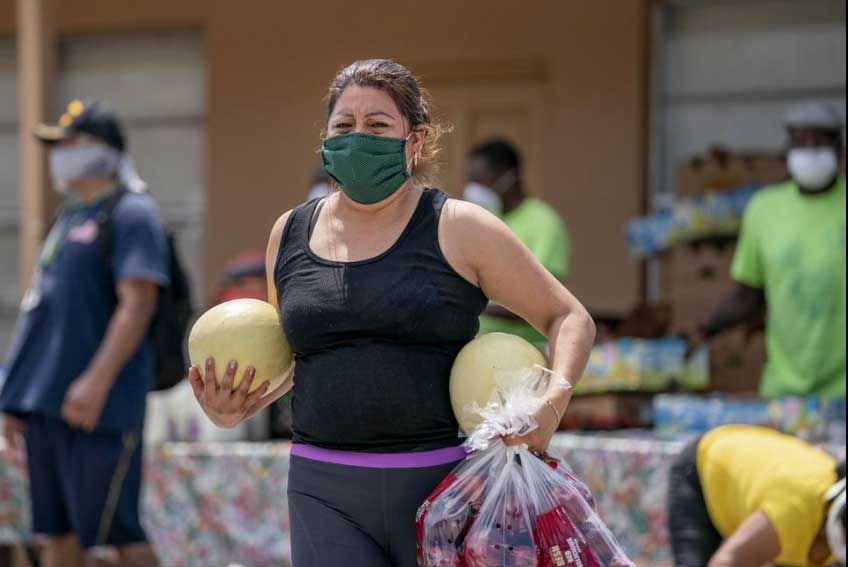 “We’re looking at the new normal,’ says the executive vice president of Feeding South Florida, which has doubled its food distribution operations during the shutdown.

The coronavirus’ economic impact can be traced in the lines of cars outside local food distribution sites operated by Feeding South Florida.

Greenacres Mayor Joel Flores knows this is true for his city, where last Friday the cars began lining up about four hours before the distribution of grocery goods was to start. The line snaked out for a few miles, from 10th Avenue North to Jog Road to Lake Worth Road.

Flores says he’ll be out there again this Friday from 9 to 11 a.m., ready to give out food supplies to some 800 families in the county’s eighth-largest city.

“We’re blue collar. We’re the workforce of the county. Unfortunately because of the economic impact of the coronavirus, a lot of our families have been affected,” says the 38-year-old mayor, a U.S. Army veteran who was elected in 2017. “Some of these families are struggling to put food on the table.”

Friday’s food distribution is one of a new wave of such efforts sweeping across Palm Beach County. The Feeding South Florida name has become synonymous with this wave because it’s the state’s largest food bank. Day after day, the nonprofit’s 53-foot tractor trailer pulls up at designated sites, carrying 40,000 pounds of groceries. By the time it leaves each site, the truck is empty.

The cargo is intended to feed some 800 families for a week. For a family of four, the supplies can represent most of the week’s lunches and dinners.

Sari Vatske, executive vice president for the Broward-based nonprofit, knows the staggering math behind the food lines. They are part of a 600 percent increase in the demand for Feeding South Florida’s services across South Florida, she says.

Vatske says the agency has doubled the usual amount of food it brings in and distributes in Palm Beach County.

Even still, many would-be recipients arrive at the car line only to find they are too late — the vouchers used as placeholders for the line often are depleted before the distribution begins.

“We are trying to deter people from lining up early. We don’t want people to wait out there for hours. It breaks our hearts to turn people away,” says Vatske.

She says her organization’s distribution strategy in Palm Beach County is to work directly with municipalities.

“We do this so we can work in an organized way and we can help create routines for people,” she says.

This is how the Friday distribution in Greenacres came to be, she says.

“It is a high-need community and it goes under the radar too often,” says Vatske.

When the coronavirus lockdown hit, Feeding South Florida was in the midst of expanding its Palm Beach County efforts to include a full culinary operation, complete with a production kitchen. The projects have been taking shape at the nonprofit’s Boynton Beach warehouse, the sprawling headquarters of its “Feeding Palm Beach County” initiative.

Plans to open the production kitchen, which will allow for both meal production and training, are on track. Vatske says the new culinary center should be ready within two weeks.

It will be part of Feeding South Florida’s expanded food distribution operations as the county begins to look beyond the pandemic.

“It may be a cliche but we are looking at the new normal. We are looking at having to maintain this level of support. It’s not like a switch will be flipped. We know a lot of these industries will be shuttered for the long term,” says Vatske. “We are actually looking at a 2008 recession-level of need.”

Before the lockdown, the nonprofit was serving 706,000 South Florida individuals deemed to be “food-insecure.”

“Now we’re looking at serving 1 million,” says Vatske. That figure would surpass the number served in 2008, 989,000 across South Florida.

The agency enters the new normal with a volunteer force that has been greatly reduced due to social distancing and at a time when retail donations are down by 25 percent.

But there is hope in new partnerships, particularly those that help in the food distribution efforts. Local cities bring their own workers, first responders and volunteers to the efforts to help ease the flow of goods to the needy.

Says Vatske: “It doesn’t get more direct, on-the-ground-service than this.”