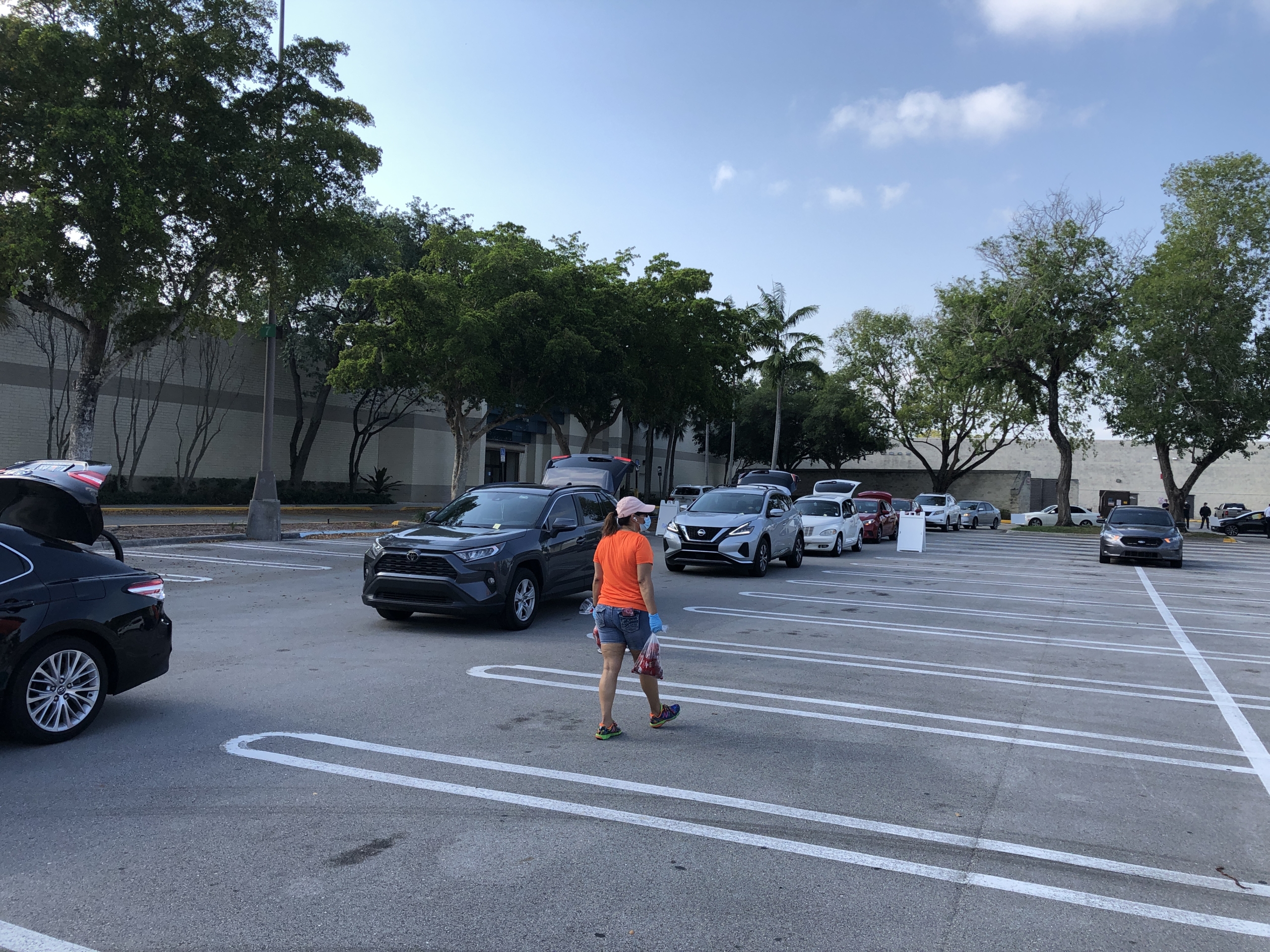 A food pantry in New Jersey that generally serves 70 people a day is now seeing up to 160. In Arizona, a food pantry that typically sees some 200 volunteers a day saw that number drop to less than 40 overnight as folks concerned about the spread of COVID-10 stayed home. In Florida, frantic panic-buying ate up a significant portion of one food bank’s expected grocery rescue, forcing them to scramble to purchase food wholesale to supplement. Across the country, food banks have been facing soaring demand and new challenges amid the coronavirus pandemic.

More Families Have Been Seeking Help From Food Banks

In Los Angeles County, the United States’ most populous county, the Los Angeles Regional Food Bank saw food distribution at its two distribution centers increase by 80% in March and April when compared to numbers from both the first two months of 2020 and that same time last year. The food bank also added 31 new agency partners and have distributed at least 17 million meals since the pandemic started in March.

In Arizona, St. Mary’s Food Bank Alliance says that just its main distribution site alone has seen the number of families it serves per day jump from about 600 to 1,500 at its highest peak. In late May, the food bank was just beginning to see the numbers curve back under a thousand.

Across the country, Florida’s largest food bank, Feeding South Florida, serves Miami-Dade County, the United States’ third most populous county. This food bank reported seeing a roughly 600% increase in reliance on its services, based on incoming client calls and requests for distribution by client partners.

“Prior to COVID, under what we call blue skies, which is non-crisis times, we were serving about 700,000 food insecure individuals,” Feeding South Florida’s executive vice president Sari Vatske tells Romper. “Right now we’re serving over a million people and we’ve more than doubled our output of food.” Vatske notes that last year, the food bank distributed 62 million pounds of food. This year, it’s on pace to distribute 105 million pounds of food.

In the first three weeks of May alone, Human Needs Food Pantry saw 225 new households access its services, which equated to roughly 852 people. “Overall, since this started in March, we’re up about 430 households,” Bruno tells Romper.

And while the New Jersey food bank normally serves households throughout Essex County, it’s now seeing, and serving, people from at least five neighboring counties. “From what I understand some of the pantries in other areas are closed, so people are really scrambling to try and find food for their families,” Bruno says.

It isn’t altogether surprising that the number of people accessing food bank resources has risen during the coronavirus pandemic, which saw a number of businesses forced to shutter temporarily, causing unemployment numbers to spike. On Thursday, The New York Times reported that data from the U.S. Labor Department showed that since mid-March, more than 40 million people had filed for unemployment.

But meeting that increase in demand during a global public health pandemic has come with a host of additional challenges for food banks. From rethinking boxing and distribution operations in light of social distancing to finding the means to supplement significant drops in donations and grocery rescue, food banks are finding a number of evolving hurdles before them as they rise to meet the increase in demand.

“At first, it was the reduction of our retail supply chain,” Vatske tells Romper of the challenges Feeding South Florida faced early in the pandemic. While the food bank traditionally picks up grocery rescue donations from more than 500 retail stores, the panic buying seen early in the coronavirus pandemic meant stores had less to donate. “It was down to about 25% of what we usually receive,” Vatske says.

In Arizona, St. Mary’s Food Bank Alliance saw its grocery rescue disappear overnight. “What you rescue from the grocery store is what’s left over and there wasn’t anything left over for food banks when people are ripping everything off the shelves,” Brown tells Romper. “You couldn’t buy canned food, much less donate it to a food bank, at least in the initial couple of weeks.”

Many food banks have also seen a drop in direct donations of food and some, like Human Needs Food Pantry, have had to halt them altogether due to concerns over sanitization. As a result, most food pantries are supplementing donations with wholesale purchases. But even this comes with issues.

“We can’t take donations because we don’t have the people to sanitize and sort everything so we’re purchasing a lot more and the supply chain is having some issues,” Bruno tells Romper. “We’re having problems getting things like chicken or ground beef or things like that.” While Bruno says Human Needs Food Pantry has so far managed to secure what they need every week, doing so has been a struggle where it didn’t used to be.

Drops in volunteer numbers and social distancing have also forced many food banks to quickly rethink how they build, fill, and distribute food boxes. “We rely on a network of volunteers, usually 200 to 250 a day, to build our food boxes, to hand out our food boxes, to do all the things that we do,” Brown tells Romper. “That number went away overnight to less than 40 a day because people didn’t feel comfortable being in group settings.”

Brown says St. Mary’s Food Bank Alliance likely would not have been able to serve all of the households who’ve approached them for help if it hadn’t received six-weeks worth of assistance from the National Guard. Like other food banks, St. Mary’s has implemented new operational procedures that make it possible for volunteers and receiving households to maintain social distancing throughout the building and distribution of food boxes.

Others, like Feeding South Florida, have quickly had to expand its infrastructure in order to accommodate the storage, sorting, and distribution of additional food. The food bank has had to add two additional warehouse spaces and 11 vehicles to its fleet as well as additional forklifts. “With double the amount of food [needed to meet demand], it costs double the infrastructure needed to help support all of that,” Vatske tells Romper, adding that the food bank’s operating costs have jumped from $125,000 a week to $500,000. Feeding South Florida also launched a home delivery program to get food into the hands of those who are housebound.

How Can Food Banks Continue Meeting This Increased Demand For Help?

What remains to be seen, however, is whether or not food banks will be able to sustain the efforts they’ve undertaken to meet skyrocketing demand. Traditionally food banks receive the bulk of their donations and assistance around Thanksgiving and end of the year holidays, which they then distribute throughout the spring and summer. With the coronavirus pandemic causing demand to skyrocket, most food banks have already distributed all of the donations they received last year and more.

And while every food bank is committed to serving as many people as they can for as long as they can, it’s a matter of having adequate food and funds. “What concerns us is the ability for people to keep donating and supporting at this increased level,” Vatske tells Romper. “It’s not a concern for our ability to operationally continue this increased output. Our concern is what does the fundraising landscape look like.”

How Can You Help?

Although businesses and cities are beginning to reopen and lift stay-at-home orders, increased need will not disappear overnight. To help, you can donate to umbrella organizations like Feeding America or make a direct donation to your own local food bank — or any of the food banks mentioned in this article — by using Feeding America’s “Find Your Local Food Bank” tool to locate the banks that serve your area.