Home
/
News
/
Why is Feeding South Florida moving to Boynton Beach after 35 years? 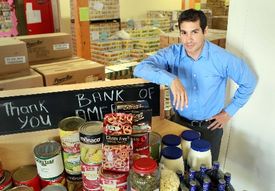 Feeding South Florida, a nonprofit that for dozens of years has worked to feed the hungry from Palm Beach to Monroe counties, has moved its local headquarters from West Palm Beach to Boynton Beach.

Feeding Palm Beach County, as the local arm is called, will open in a 25,644-square-foot space on Park Ridge Boulevard that’s twice the size of what it had in West Palm. The extra space is necessary, said president and CEO Paco Velez.

“This will allow us to more than double what we’ve been doing in the county,” Velez told The Palm Beach Post.

The nonprofit closed on the property just south of Gateway Boulevard and just east of Boynton Beach High School this week. The new location comes at the same time as the organization celebrates its 35th anniversary.

The move is welcomed by Boynton Beach Mayor Jerry Taylor. “I think they can do a lot for the community. They’re going to work with the food kitchen, the Community Caring Center. That’d be great to have them operating right out of here,” Taylor said.

The Boynton facility will have a cooler/freezer that will help to store more fresh produce, lean protein and dairy. The new building includes two covered bay doors with space for tractor trailers and space to install three-tier racking. It has a community kitchen which is designed for commercial production, and also offers programs to break the cycle of hunger and poverty.

Also, the space has two extra acres the organization can use to expand when necessary, which seems to be likely. In 2012, the organization put out about 5 million meals, compared to 9.1 million in 2015.

Feeding South Florida, formerly Daily Bread Food Bank, is a member of the Feeding America network and is the largest food bank in Palm Beach County. In addition to the Boynton Beach location, the nonprofit also has a warehouse in Pembroke Park in Broward County. Velez describes Feeding’s function as rescuing food from those who have it and giving it to those who need it. The food is distributed to the hungry through local nonprofits.

Palm Beach County has the largest percentage of “food-insecure” people out of Palm Beach, Broward and Miami-Dade counties, but the lowest actual number. There are 202,110 people who don’t know where they will get their next meal from, according to the stats, which is 15.1 percent of the population.