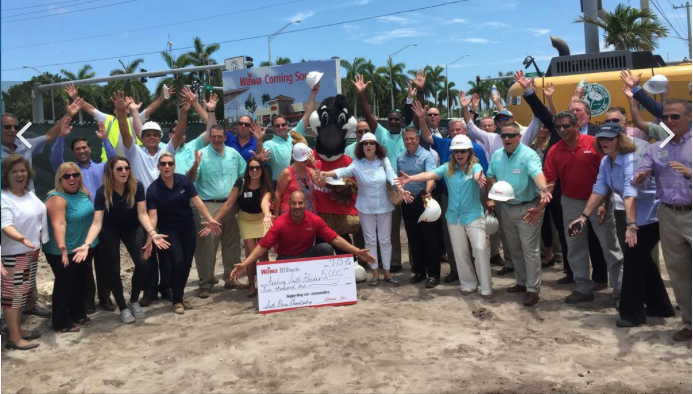 Wawa stores broke ground in Pompano Beach and West Palm Beach on Wednesday as the company’s CEO said he wants to reach 100 locations in South Florida.

The Pennsylvania-based gas station, convenience store and fresh food chain has expanded to Florida in a big way. Four years after entering Central Florida, it has 90 locations there and near Tampa and is set to open its 100th store in November. It has over 3,500 employees in Florida.

“We had people who didn’t know what a Wawa was and now they’re running some of our best stores in Florida,” Wawa CEO Chris Gheysens said.

Wawa is a Native American word for goose.

The company is over 200 years old and is one of the largest employee-owned firms in the country. Gheysens said it has about 200 employees who own over $1 million in stock thanks to its free stock compensation program.

Wawa also is among the most popular convenience store chains, as it’s always open, offers fresh sandwiches or salads that can be ordered through a touchscreen or mobile app, and has a large variety of food and coffee. Gheysens said the Florida stores have menus designed for local tastes, such as Cuban coffee and Cuban sandwiches.

“We hope over the next five years to have over 50 locations in South Florida,” Gheysens said. “We will eventually be at over 100 stores in South Florida and it means many opportunities for growth.”

Each store is an investment of about $6 million, he said. Each location typically employs 40 workers who earn a minimum starting wage of $10 an hour.

The groundbreakings on Wednesday were held at Federal Highway and Sample Road in Pompano Beach and at Belvedere Road and Australian Avenue in West Palm Beach. Wawa showed off its exterior and interior renderings for those locations

The eight other Broward and Palm Beach county locations that Wawa said either recently broke ground or would do so soon are at Stirling Road and Davie Road in Davie, at Broward Boulevard and 27th Avenue in Fort Lauderdale, at U.S. 441 and Loxahatchee Road in Parkland, at Commercial Boulevard and Northwest 94th Avenue in Sunrise, at Lake Worth Road and Jog Road in Greenacres, at Lake Worth Road and Congress Avenue in Palm Springs, at Blue Heron Road and Garden Road in Riviera Beach, and at Forest Hill Boulevard and Congress Avenue in Palm Springs.