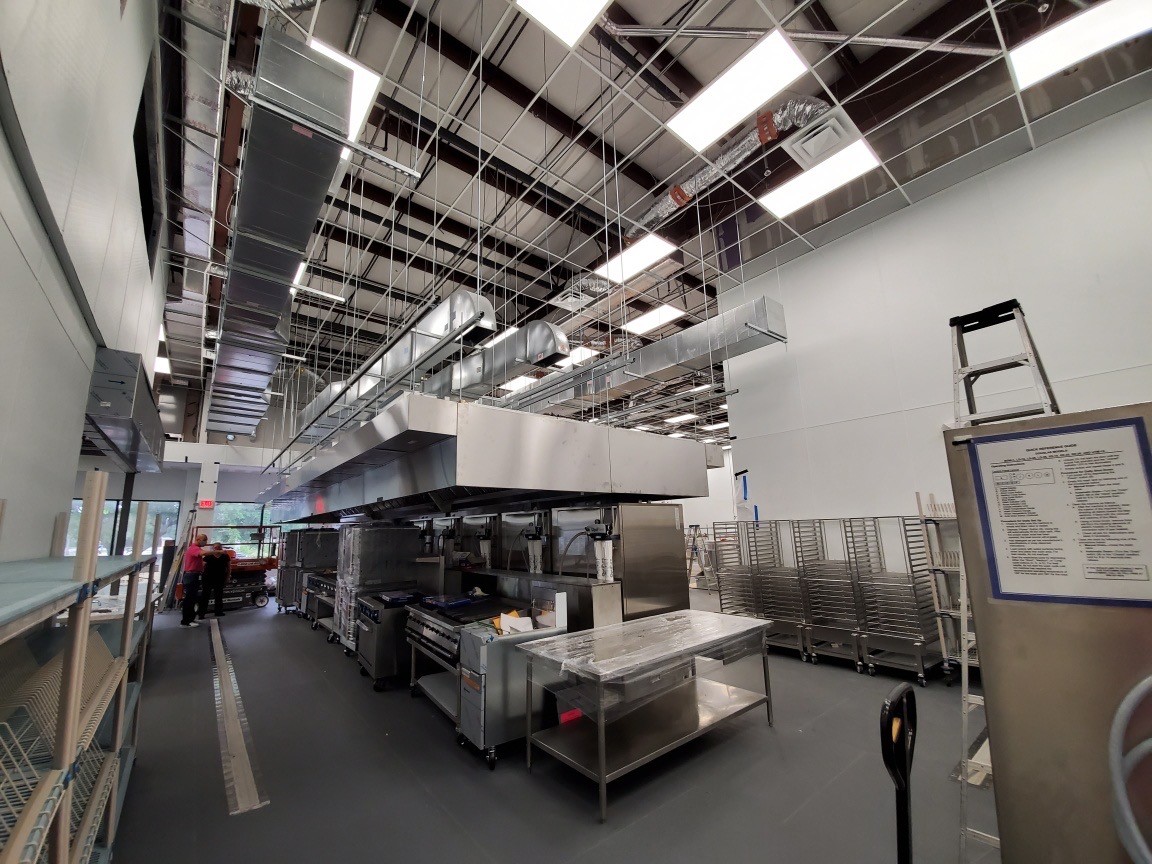 THE NEW YORK TIMES | BOYNTON BEACH, Fla. — The new kitchen was still under construction here at the Palm Beach County branch of Feeding South Florida, a food bank, when Chrissy Benoit walked through the warehouse in March. Fruits and vegetables had started arriving in unusually large amounts from nearby farms, which got her thinking about the cooking she would do when the kitchen was finished.

“Bell peppers, squashes, zucchini, cucumbers, apples — the things that you would think typically grow in abundance we see a lot of in a fairly short window of time,” said Ms. Benoit, the branch’s general manager. “It’s kind of like a ‘Top Chef’ challenge, only instead of a box, you’ve got a pallet.”

Food banks typically distribute boxes of ingredients for people in need to prepare at home. But this one has sped up construction of its kitchen during the pandemic to do something it hadn’t before: cook.

The kitchen is a single response to two huge and seemingly paradoxical problems vexing communities all over the nation: too much food, and too little. It aims to use a glut of produce and meat from local farmers, who have lost their pipeline to restaurants and other big customers, to make meals for a soaring number of people suddenly facing hunger.

Since March, demand for food has leapt by 600 percent at Feeding South Florida, the largest food bank in this agriculture-rich state. When the new kitchen opens, as early as next week, Ms. Benoit and her staff will begin preparing 10,000 hot meals a day.

At the same time, Feeding South Florida will join the ranks of food banks across the country that are trying to better serve their communities by stepping up to the stove, as unemployment spreads and the start of the harvest moves north.

“Our typical client gets a box of produce to make food — that’s a great model,” said Brian Riendeau, executive director of Dare to Care, a food bank in Louisville, Ky., that plans to open a large production kitchen later this month. “But we also have a lot of single parents working two jobs. What they don’t have is time to cook a meal.”

Food banks that can turn tomatoes into marinara are fighting more than hunger. Cooking allows them to process larger amounts of perishable food as the coronavirus sows chaos in the country’s food system, forcing farmers to plow under crops and dump milk, and meat processors to shut down plants and euthanize animals.

Farmers donate much of the food for relief efforts, but food banks are trying to find money to at least pay them for the costs of harvesting and delivery.

The intersecting problems of growing hunger and food waste came early to South Florida, where the harvest hit its stride this year just as local farmers’ biggest customers — restaurants, hotels, school districts, Walt Disney World — shut down in response to the virus.

“When that demand stopped, the farmers had to readjust,” said Nikki Fried, the state agriculture commissioner. Farmers and distributors have suffered more than $500 million in losses so far, she said. (Even so, with travel at a standstill, the state’s $137 billion agriculture sector has overtaken tourism as Florida’s largest industry.)

One Florida farmer plowed under 100 acres of green beans and 60 acres of cabbage, according to the Institute of Food and Agriculture Sciences at the University of Florida. Another predicted that 10 million pounds of his tomatoes would stay in the fields.

Paco Vélez, the president and chief executive of Feeding South Florida, said a local farmer donated eight semi-truck trailers of tomatoes to the food bank and its partners in March. “We’d never received that much before,” he said. “Because of its perishability, we have to move it real quick.”

The delivery was an early signal that food waste and hunger were rising on parallel tracks. The United States Department of Agriculture recently responded with $300 million a month in grants that allow food distributors to buy surplus meat, produce and dairy products and pass them to food banks and other charities.

Feeding Pennsylvania, a sister food bank network to Feeding South Florida, is benefiting from that money just as it ramps up its ability to cook. This week, the network, which does not have a kitchen, began a program that enlists Pennsylvania restaurants to make ready-to-eat meals to distribute across the state.

Most of the meals, which come in pans large enough to feed a family of four, will be frozen. This allows Feeding Pennsylvania to preserve perishable food at a time when bulk buying and panic-shopping are making shelf-stable items harder to come by, said Jane Clements-Smith, the network’s director.

“Families can put the meals in the freezer and pull them out when they need them,” she said. “It gives them an easy night, which everyone wants right now.”

The program will produce 520,000 meals a week. It is funded into June by money from the Federal Emergency Management Agency and the state, but a similar operation could extend into the summer, when the Pennsylvania harvest season hits its peak, Ms. Clements-Smith said. In anticipation, she is encouraging charities that receive food from her food bank to apply for state government grants to increase their cold-storage capacity.

“We’re watching what’s happening in Florida,” she said. “Our growing season is coming. We’re putting our heads together, to be sure we’re prepared.”

The mass-cooking campaign in Pennsylvania is a partnership with Operation BBQ Relief, a disaster-relief organization created in 2011 to feed tornado victims in Joplin, Mo. The group provides know-how, money and ingredients from its supplier network to restaurants joining the effort to feed people.

“The break-even is, we have to do 2,500 meals a day at each restaurant to make it cost effective,” said Stan Hays, a founder and the chief executive. “We get chefs who are like, ‘We’ve done catering for way more than 2,500 people before.’ I say, ‘Have you done it 14 days in a row?’ ”

Shannon Brown saw firsthand how difficult it can be for chefs to transition from normal restaurant service to disaster work. Ms. Brown is an owner of Sonder, a restaurant in Bakersfield, Calif., that helped Operation BBQ Relief develop the pilot program it brought to Pennsylvania.

“I’ve never seen food in that volume,” Ms. Brown said. “When they start unloading the truck, it looks like a clown car.”

The program is similar to those run in the pandemic by the charities of well-known chefs like José Andrés and Edward Lee. The difference for chefs working full-time in hunger relief is that the high-volume work never ends.

Leandra Forman, a restaurant-trained chef who runs the kitchen for FoodChain, a nonprofit group in Lexington, Ky., said learning to turn donated ingredients into hundreds of meals a day takes practice. “You can’t just expect restaurant chefs to come in and know how to do this. I see 10,000 pounds of butternut squash, and have to figure out how to turn it into lunch.”

FoodChain, which normally focuses on food sustainability and education, has partnered with the area’s largest food bank, God’s Pantry, and other local charities to cook meals for homebound seniors, out-of-school children and elderly refugees.

Becca Self, FoodChain’s founder, is looking ahead to the coming growing season. “We’re trying to talk to farmers now about how to make it worth it for them to make that harvest,” she said. “One of our biggest crops coming up is asparagus. It’s typically grown for a high-end restaurant market — and those restaurants are gone now.”

The San Antonio Food Bank operates two kitchens, with construction on a third underway, and has been feeding 120,000 people a week, twice as many as it did before the pandemic.

“One of the challenges of this coronavirus environment is the demand being greater than the supply, and not being able to offer all the varieties of food to nourish a family,” said Eric Cooper, the food bank’s chief executive. Modern grocery stores “are providing more cooked, healthy meals. With our kitchens, we can offer our clients the same thing.”

Inside Feeding South Florida’s warehouse in Boynton Beach, Ms. Benoit looked on in early May as a construction crew installed vents in the kitchen.

“The goal is, how much more can we create to give people a more interesting array of options,” she said, speaking through a face mask decorated with images of blue crabs and shellfish. “There are only so many families you can just hand a 25-pound bag of apples to.”

Honey-roasted chicken, fruit salad with torn mint, and farro risotto with asparagus are some of the first dishes Ms. Benoit expects to cook. They’ll be distributed in sealed TV-dinner-style containers.

“We want to do a lot of citrus marinades,” she said. “You get a ton of flavor and it adds juiciness to the meats. We see a lot of oranges, lemons and limes around here.”

She worries that better times will not return in the fall. “If the economy doesn’t rescale, the demand from the hospitality industry will be down, but the charitable need will be up,” Ms. Vatske said.

Whatever happens, Ms. Benoit said she’ll remain focused on the kitchen. “All the cooking everyone is doing right now, we’re doing 365 days a year,” she said. “We’re always food banking.”

By: Brett Anderson
Originally published by The New York Times on May 14, 2020. View original article, here.