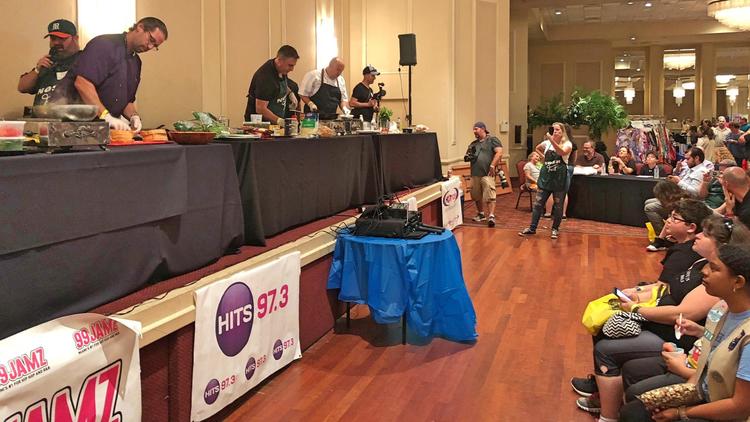 More than 3,000 people “noshed” and mingled for an important cause at the recent eighth annual Nosh Fest at Temple Beth Emet in Cooper City.

The synagogue teamed up with WeCare Food Pantry and the food bank Feeding South Florida to host this year’s event. Nosh Fest is an annual food festival that shares different cuisines and culture with the community while raising awareness and providing food to those in need throughout Broward, Miami-Dade and Palm Beach counties.

Sara Lipman, a festival co-chair, said, “We had a vision of perfect weather, lots of people and lots of smiles on people’s faces for this event. I think we achieved that mission.”

Both Lipman and fellow festival event co-chair Gail Levi felt that Jewish values such as tikkun olam (repair the world), were demonstrated at the festival.

“There is the tradition of helping others, mitzvot and getting families together here at this event,” Levi said.

The synagogue started this festival almost a decade ago when the economy crashed and there were people in the community struggling to feed their families.

“We knew there was an issue with hunger in our community, so that’s how this festival began, to support those who needed food,” said Laura Goodman, the synagogue’s director of engagement and programming.

The event originally began as an internal event with the synagogue’s caterer providing food and no outside food vendors, which were added last year. Over the years, WeCare and Feeding South Florida joined on as partners for the event.

Goodman said regarding the partnership with both food organizations for this event, “It’s important that we support our local food pantries and if we can throw another one in next year, we will. We just want to make sure that everybody gets a piece of the pie.”

Sari Vatske, vice president of community relations for Feeding South Florida, thought the event was “a great opportunity for the community to learn about the issue of hunger in South Florida.”

“People don’t realize that in South Florida, one in five kids go to bed hungry, so events like this really help fill that need,” she continued.

Regarding the festival’s growth over the years, Vatske said, “I think it means that the community is engaged in its neighborhood and that there’s a strong desire to come together and support those in need.”

Cox Media Group Miami provided music for the event for the first time this year.

“This is our first year, but it won’t be our last,” said Ellen Jaffe, on-air/ community affairs host for Cox Media Group Miami.

Jaffe praised the synagogue and its partners for their efforts on the event.

“They’re about community,” she noted about the synagogue. “The fact that they’re a temple is an aspect of what they do, but they don’t exclude anyone, and Feeding South Florida is the premiere food bank in our four county [Broward, Palm Beach, Miami-Dade and Monroe] area, so anytime we can help feed our neighbors, we want to be part of that.”

Visit templebethemet.org for more information on the synagogue.