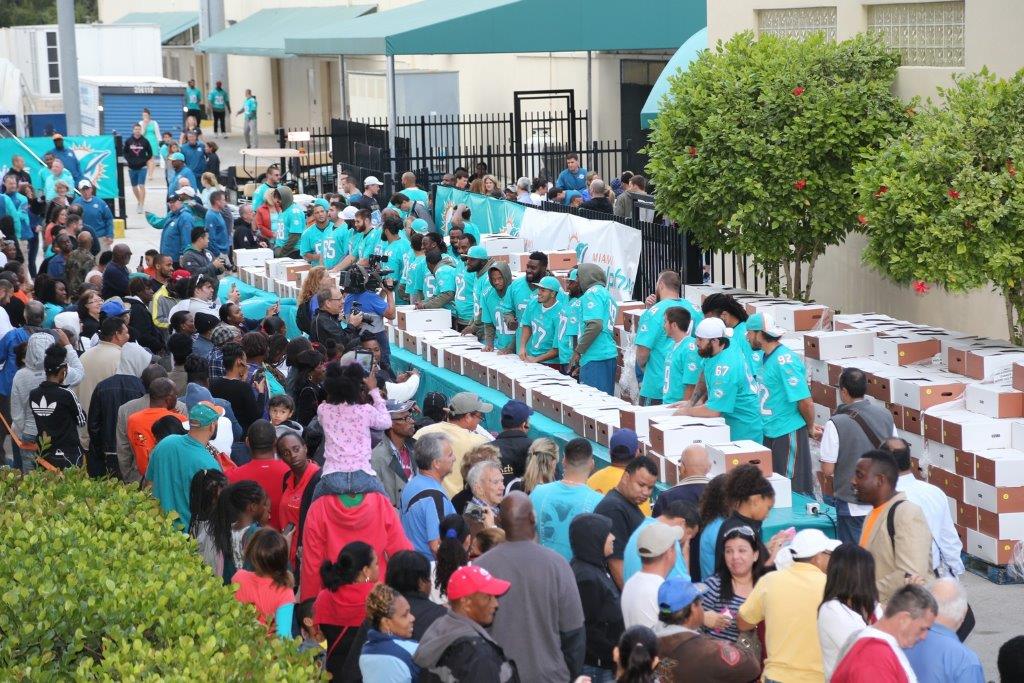 The Miami Dolphins continued their longstanding tradition of assisting the community and those in need during the 2019 season. Players, cheerleaders, alumni, and staff collaborated to feed more than 8,500 members of the South Florida community throughout November.

“We look to impact and unite the South Florida community in ways that are meaningful and engaging throughout the year and always seek opportunities to give back during the holiday season,” Miami Dolphins Senior Vice President of Communications and Community Affairs Jason Jenkins said. “We have committed leadership in Stephen Ross, Tom Garfinkel and Chris Grier who recognize our role as stewards in the community to make this Thanksgiving enjoyable for everyone.”

As part of the Miami Dolphins FOOTBALL UNITES™ Bigs in Blue program, Dolphins rookies joined youth from Big Brothers Big Sisters of Broward, Big Brothers Big Sisters of Miami and local law enforcement officers to participate in the Dolphins Kids Cook-off presented by Publix on Tuesday, Nov. 12. The group gathered for an evening of fellowship and bonding through an interactive cooking class and the students received $100 Publix gift card to help with groceries for the upcoming holiday season.

Miami Dolphins alumni Elmer Bailey and Larry Ball, cheerleaders and the Dolphins met with students of the Leadership Learning Center at St. John Bosco and distributed 50 turkeys on Friday, Nov. 22.

The Miami Dolphins and Dolphins cornerback Xavien Howard provided Thanksgiving meals to 20 local youth and their families at Hard Rock Stadium on Monday, Nov. 25. The Publix meal boxes included a turkey and sides and were distributed to pre-selected families from Generational Cure, a FOOTBALL UNITES™ community partner.

These events are part of an ongoing series of the #DolphinsHuddlefor100 service projects as part of the NFL’s 100th celebration. The NFL has invited fans, players, clubs, and employees to join Huddle for 100, an effort to inspire 1 million people to volunteer 100 minutes of their time to make meaningful contributions to their communities. These activities are in connection with the Miami Dolphins’ initiative to level the playing field through the power of teamwork to inspire a healthier, more educated and united South Florida community.

For more information on the NFL Huddle and to see volunteer opportunities with the Dolphins, visit https://www.miamidolphins.com/community/specialteams.