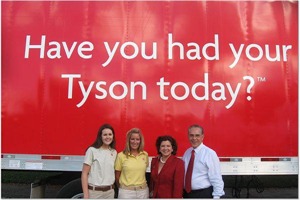 Tyson Foods, Inc. and the League of United Latin American Citizens (LULAC) are partnering in October to donate five truckloads of protein to food banks in Washington, D.C., New York City, Los Angeles, Houston and Miami. The first donation took place in Washington, D.C. at the Capital Area Food Bank on October 3, with the other distributions scheduled during the remainder of the month. Feeding South Florida’s donation is scheduled for October 25.

“We are thrilled to receive this generous donation from Tyson Foods to help our efforts in providing more nutritious meals to children and families in need,” said Nancy Roman, Capital Area Food Bank President and CEO. “Hunger has tremendous short and long-term detrimental effects, especially on children, and this donation will help ensure that children in need can grow into healthy, productive adults.”

“Given the influx of unaccompanied minors that arrived over the summer, the donations to food pantries with a high concentration of refugee children is particularly timely,” said LULAC National Executive Director Brent Wilkes. “This donation will go a long way to help address food disparities in the Latino community, especially the families who now have the challenge of putting an extra plate on the table.”

Tyson’s total donation involves 151,000 pounds of protein that is being distributed to food banks in five urban areas. Each will receive approximately 30,000 pounds. These food banks have a strong commitment and history of providing help in areas with high rates of childhood hunger.

“There is a large need for protein in these areas and we are able to fill that void,” said Nora Venegas, director of government relations for Tyson Foods. “We are proud to stand with LULAC to make a difference in areas we know we can.”

The remaining donations will take place on the following dates:

Tyson Foods’ current “KNOW Hunger” campaign is focused on helping more people understand and join the effort to eliminate hunger in America. The company also partners with Share Our Strength, Lift Up America, and Feeding America to raise awareness and help feed the hungry across the nation. Since 2000, Tyson Foods has donated 96 million pounds of food toward hunger relief.

About Tyson Foods
Tyson Foods, Inc. TSN, -1.32% with headquarters in Springdale, Arkansas, is one of the world’s largest producers of chicken, beef, pork and prepared foods that include leading brands such as Tyson®, Jimmy Dean®, Hillshire Farm®, Sara Lee®, Ball Park®, Wright®, Aidells® and State Fair®. The company was founded in 1935 by John W. Tyson, whose family has continued to lead the business with his son, Don Tyson, guiding the company for many years and grandson, John H. Tyson, serving as the current chairman of the board of directors. Tyson Foods provides a wide variety of protein-based and prepared foods products and is the recognized market leader in the retail and foodservice markets it serves, supplying customers throughout the United States and approximately 130 countries.