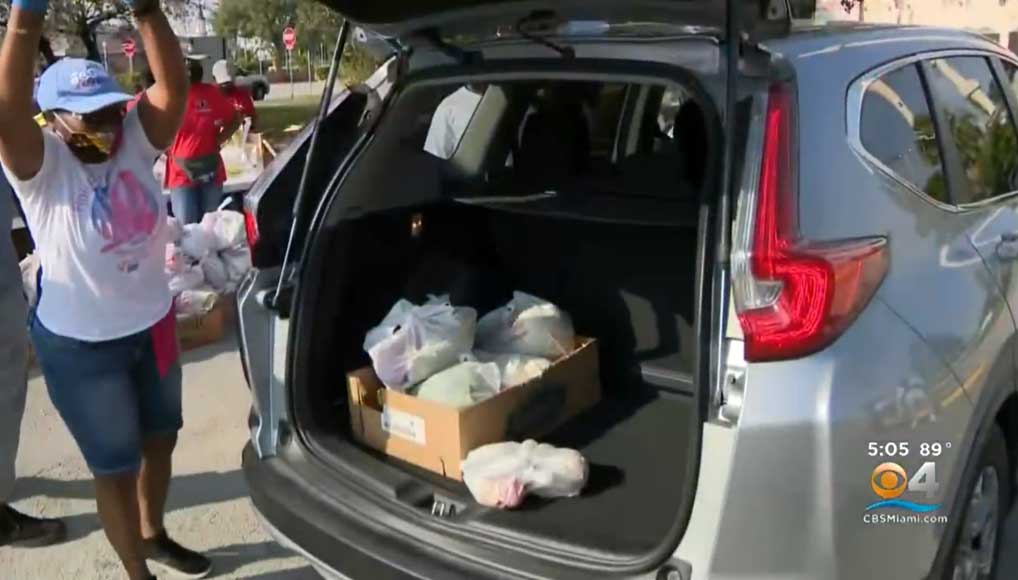 This was the latest in what has become a daily occurrence to help families struggling during the coronavirus pandemic.

The line outside Sherbondy Park, located in the 380 block of Bahman Avenue, began forming as early as 3:30 a.m. and the food began being distributed at 9 a.m.

Cars with open trunks were being loaded, one by one, with groceries and other necessary household items.

The event took place in orderly fashion and police could be seen to guarantee proper order during the event.

Chopper 4 was over the scene, which showed the long line of vehicles waiting to receive the much-needed food.

“I feel good about this line. We need it,” said Freddie Whitehead, who was picking up food.

“I don’t know what’s inside. All I know is I have needs and I need a lot of things,” said Maria.

“It’s very good help. A lot of people lost their jobs and don’t have income or they lost someone. They are struggling.”

There was enough fruit and vegetables here for 1,500 families.

“This is a collaboration with the City of Opa-locka and Feeding South Florida and involves quite a few churches and volunteers and help with all this food in Opa-locka.”

“Right now we are dealing with a crisis with the coronavirus. A lot of people are unemployed and they need to get this food and through this line.”

People were told to drive up with their trunks open.

“We are taking all sorts of steps to be efficient and careful. As you can see cars are stretched out for a mile on 27th street and workers and using gloves and masks and sanitary conditions to get through this safely.”

“A lot of people are very grateful for this and I can’t say enough about the volunteers who are giving them help and helping others.”

The mayor is particularly sensitive.

Cindy Vasquez was in this line for three hours and says it was worth the wait.

The next food distribution at this location is next Tuesday and every Tuesday. It’s open to anyone in the public.

Based on this demand, it may be a good idea to get here early.

CBS4’S Peter D’Oench also went inside the organization’s warehouse in Pembroke Park and spoke with Paco Velez, the President, and C.E.O. Of Feeding South Florida.

He said the last few weeks have been extremely busy.

“The crisis that we are facing is much different than a crisis we have ever faced before,” he said.

“Feeding South Florida has helped a lot of people after Hurricanes like Irma and Michael. But in this case, we are limited in the amount of food we can bring in from other parts of the country just because the country has been impacted. We are limited in the number of volunteers we can have in this facility at one time because we are not allowed to congregate.”

He says we are seeing some sobering images with the long lines of people wanting to get food.