It should be of great concern to taxpayers and policymakers that Commissioner Fried 1) chose to award this contract in a way that she maintains is not eligible for review or appeal; 2) refuses to acknowledge that obvious errors were made, and 3) refused to review the scores in a public and transparent way with the oversight of an impartial third party, the way nearly 200 residents, partner agencies, elected officials and Feeding America asked her to do.

(To view the letter from Feeding America’s CEO, click here.)

The Sun-Sentinel Editorial Board accurately concluded in its June 9th Editorial that, “Fried should rule based on facts, not politics. If she decides [Contractor] won fair and square, she must explain the scoring irregularities.”

Despite this, Commissioner Fried has not provided an accounting for the scoring irregularities. If she has, they have not been shared with Feeding South Florida or its counsel. It remains unclear how one organization receives perfect marks but is deducted points and the other organization receives lower marks but is awarded full points. It is also unclear how points awarded by one reviewer change from region to region despite all answers being the same across all applications. The many other scoring irregularities remain unclear as well.

It was pointed out that changing the score of just one example Feeding South Florida provided did not change the outcome of the contract award. Among many other things, what was not considered is that it was only one example… of many.

Below is a chart that outlines how changing just Reviewer A’s many errors changes the outcome of the contract. 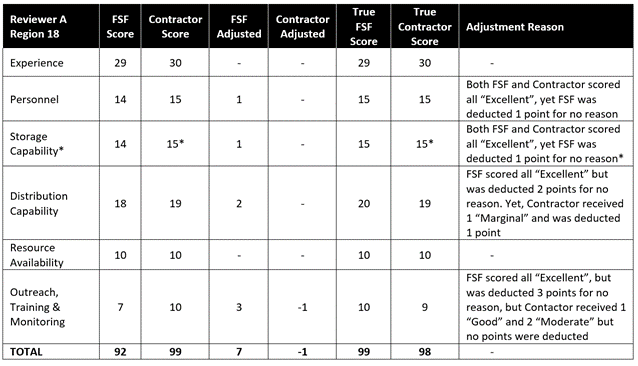 *Under “Storage Capability”, FDACS said they gave preference to organizations that had two technologies in place 1) automated online ordering, and 2) automatic temperature recording. Feeding South Florida has both technologies while the Contractor does not. Despite FDACS’ stated written preference for these items, FDACS did not take these items into consideration when scoring the applications. Although Feeding South Florida should have received higher points for having the preferred technology, Feeding South Florida did not make those adjustments in the scorecard above to further highlight the point that properly scoring just a few errors made by Reviewer A changes the outcome.

Correcting only Reviewer A’s points to accurately reflect the marks given to Feeding South Florida and the other applicant would result in Feeding South Florida as the contract winner. The correction moves Feeding South Florida up from 138.8 to 140.2 and the Contractor down from 140.2 to 140. To be clear, the outcome changed with correcting only Reviewer A’s errors. This does not include adjustments for the similar numerous other errors. And, this is for Broward County, where there as a difference of 1.4 points. Due to similar errors, the outcome would also change in Miami-Dade where there was a difference of only 0.8 points.

For a more thorough overview of many errors, showing why Feeding South Florida, its supporters, partner agencies, elected officials and the community at large believe this should be rescored, click here.

The Sun-Sentinel Editorial Board also states in its June 9th Editorial that, “She (Commissioner Fried) has repeatedly criticized DeSantis for undermining ‘the public trust.’ That’s at stake here, too. Fried should provide all relevant documents and a fully transparent explanation in a public forum as soon as possible, even if it means acknowledging mistakes by her own employees.”

To date, Feeding South Florida has not seen this explanation.

For a complete and verifiable overview and timeline of the records request, click here.

If this was the transparent and thorough process that FDACS claims it was, the outstanding questions must be answered:

Most importantly, it’s most concerning that this decision is not in the best interest of the individuals and families who rely on as much TEFAP food as possible. Through data provided directly from FDACS, no other organization in the state brought in as much TEFAP food as did Feeding South Florida, despite other organizations having the same opportunity to do so. TEFAP has two streams of food; entitlement and bonus (bonus has sub-streams). The entitlement stream is allocated by region and does not change. The bonus stream can be accessed by all contractors, and this is where we will see, based on past performance, less food will be brought into South Florida.

Although Feeding South Florida only has 17.6% of the TEFAP contract, Feeding South Florida brought in 36.53% of the state’s commodities – 52 million pounds to Palm Beach and Broward Counties; this is an additional 48 million pounds above the base allocation to the region. In contrast, despite having 23.2% of the state’s contract, the Contractor brought in 34 million pounds to both their regions, only 18.9 million of which was distributed to Miami-Dade and Monroe Counties. This performance history isn’t just for 2020, it’s been similar over the past years; it reflects the desire, capacity and ability to bring in as much food as possible.

As a result of Commissioner Fried’s regrettable and inexplicable decision, Feeding South Florida will pursue all legal options available, while also continuing to focus its efforts on its mission of providing immediate access to nutritious food and expanding its innovative programs that address the root causes of hunger.

TEFAP is only one piece of the food insecurity equation, and while it is the sole source of federal support for food banks in times of disaster, Feeding South Florida, with the increased support of its donors, will work that much harder to secure additional streams of food through its partnerships with retailers, manufacturers, distributors and farmers. Feeding South Florida will also continue the rollout of its innovative programs including culinary and warehouse training, its “Food Is Medicine” initiatives like the Mobile FARMacy and hospital pantries, the creation of cutting-edge technology designed to measure output in real time, providing wraparound services like SNAP benefits, and so much more.

Feeding South Florida is proud of its record of service to Palm Beach, Broward, Miami-Dade and Monroe Counties and is committed to serving and advocating for the children, seniors, veterans, and families who need it most.

While Feeding South Florida remains committed to executing its mission, we ask that the community remain vigilant in holding policymakers accountable for transparency. The American Rescue Plan contains additional commodities and investments that are only available through TEFAP. These commodities are scheduled for imminent release and will be administered through state Agriculture Departments.

This means Commissioner Fried will continue to have sole discretion to handle these much-needed resources for families. Given the lack of transparency, lack of oversight and decisions made that are not in the best interest of families, Feeding South Florida is concerned about retribution for bringing these glaring errors to light; we’ve already experienced repercussions from FDACS for doing so.

Feeding South Florida values are service above all else, compassion, dedication, integrity and stewardship. Ending hunger is our mission, transforming lives is our passion, and advocacy is our calling. The trust you place in us to serve your neighbors compels us to advocate for those who otherwise wouldn’t have a voice, no matter how difficult it might be.

Feeding South Florida thanks its donors, volunteers, partner agencies and hardworking team members for their continued support and belief in holding policymakers accountable. Most of all, we thank the community for helping ensure that our food insecure neighbors have the resources necessary to thrive. Together, we’re changing lives one meal at a time. Together, we’re Feeding South Florida.