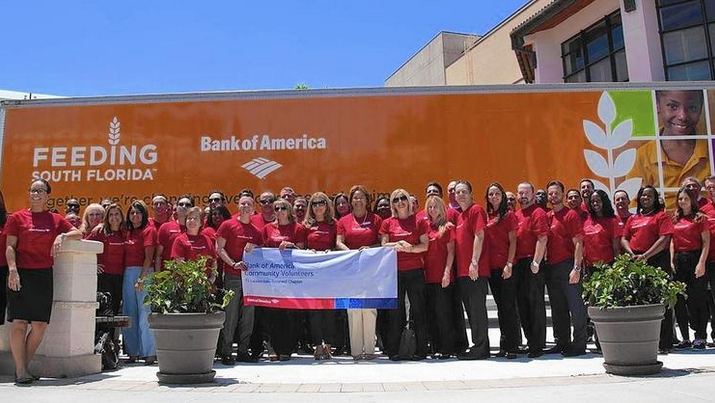 Paco Velez considers his new Feeding South Florida refrigerated truck, he doesn’t see steel, an engine and rubber tires. He sees families gathered around the dinner table, children with their bellies full, and senior citizens not worried about missing meals.

Feeding South Florida unveiled its new 53-foot mobile cooler recently at Fort Lauderdale’s Broward Center for the Performing Arts, demonstrating how it will transport fresh produce and perishable food to South Florida’s hungry. The truck, which can hold at least 42,000 pounds of food at a time, was made possible by Bank of America’s $200,000 Neighborhood Builder grant.

“Hunger is a huge issue, and it shouldn’t be,” said Feeding South Florida president and CEO Velez.

“For me, it’s about fairness and justice,” he said. “It’s about the fact that the people who take care of us — field workers who put food on our tables, hotel and restaurant workers — are not being taken care of. There are innocent children, and older people who worked all their lives and maybe were hurt in the recession. There are people working in South Florida who can’t make ends meet because of the high cost of living, so we need everyone to be involved.”

For Velez, the new refrigerated truck, which is one of the organization’s fleet of 15, will help remedy two problems: the issue of people needing food and the issue of food going to waste. “There is a minimum of 300 million pounds of fresh produce that goes to waste every single year just in Florida,” he said. “We’re fortunate to have great agriculture, but the biggest issue is how to get it from where it is to where it needs to go.”

The mobile cooler will collect food from farms and retail operations, and then deliver an estimated two million pounds of food each year. Feeding South Florida is one of 202 food banks in the Feeding America network nationwide. They are the leading hunger-relief organization in South Florida, serving Palm Beach, Broward, Miami-Dade and Monroe counties by partnering with nonprofit emergency food service programs, such as soup kitchens, food pantries, homeless shelters and group homes. Last year, the organization fed 871,920 people, distributing more than 40 million pounds of food to agencies and directly to families.

In the lobby of the Broward Center for the Performing Arts, 100 red-shirted Bank of America volunteers eagerly awaited the truck and then set to work, forming assembly lines to stuff 1,000 plastic storage bags with lentils, cans of tuna, granola, Vienna sausages and milk. The Feeding South Florida Backpack Program provides select schools and partner agencies with packs of food that children can take home on the weekend: two breakfasts, two lunches, two dinners and two snacks that fit easily into a child’s backpack.

One volunteer, Gina Epstein, said her passion for working with Feeding South Florida stems from the fact that she is born and raised in Fort Lauderdale. “This is my home, and I want to help,” said Epstein, a market sales manager. “Giving back is so important, and helping children is particularly special. I’m grateful for everything I have and want to help those less fortunate.”

BOA Market President for Broward County Lori Chevy agrees. “Not only will this truck feed those who are food insecure across South Florida, but this event is about feeding food insecure children over the weekend. Any time we can help create a better life for people in our community makes it a better community for all,” said Chevy, pointing out that on a regular basis there are nearly 2,000 children in Broward County who go hungry on the weekends.

Schools have documented that all too often many children do not eat between Friday’s school lunch and Monday’s school breakfast; studies show that hunger leads to poor academic performance, as well as behavioral and health problems.

Or, as BOA volunteer James Carlson put it: “There are some underprivileged kids out there with all the talent in the world, but who don’t have the resources to get them where they need to be. This is a great way to help them.”