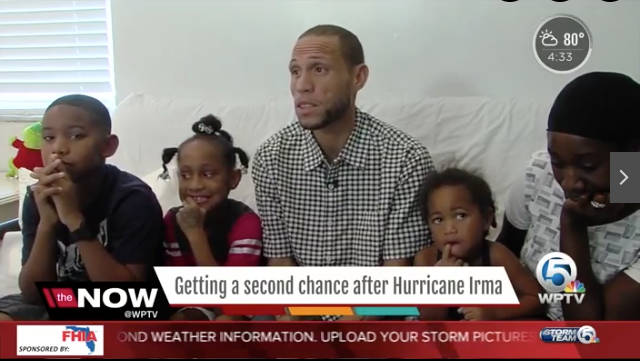 Family of 6 given food, work and support

There is one family from Okeechobee that’s getting a second chance on having a stable life.

The Mills family has lost their home to Hurricane Irma, lost their jobs, their car and even watched their toddler go through remission from kidney cancer — all within the past two months. Thanks to Feeding South Floridaand their food pantry program, their lives are a bit brighter just in time for Thanksgiving.

“It’s been very hard, we lost everything from paperwork to clothes, to the kids toys,” said Brian Mills.

Brian, his wife Monik and their four children lost everything to Hurricane Irma.

“The house was totally destroyed in the storm, totally pushed off it’s foundation while we were in it, we were actually rescued out of it by Okeechobee Fire Rescue and police,” said Brian.

With the house condemned and deemed unsafe to live in by state authorities, FEMA put the family up in a small motel in Lauderdale By The Sea.

“When we got here, we had nothing. We knew no one,” said Brian.

On top of this, 2-year old Sy’mere is in remission from kidney cancer. He had a kidney removed earlier this year and became very sick during the storm.

“He had pneumonia. We’re dealing with the storm, dealing with how we were gonna deal with where to stay, how to eat? It was just so much all at one time,” said Brian.

With no money, no work and barely any food, the Mills were on their last straw. With Sy’mere’s health deteriorating, Brian and Monik also worried for their other children, 10-year old Airrieon, 8-year old Breyani and 6-year-old Yashuwa.

“We had two packs of noodles and some beans and rice. We put that together and we made it work, while I pondered my next move and the next way to feed my family,” said Brian.

“These are my pride and joy, I sleep for them, I wake up for them..I do everything that I do in my life for them,” he said of his kids.

But a call from Sari Vatske with Feeding South Florida, changed their lives. The organization was connected with the family after local news reports in Miami.

“She asked me what do I need, what does my family need,” said Brian. “She brought new life into my family and gave us hope. Without them, it would’ve been hard for us.”

“That’s really what we’re here for, to jump in and provide immediate access to nutritious food,” said Vatske. “It keeps us up at night to know that there are families that we haven’t reached but its through stories like this that there is help out there in the community,” said Vatske.

Beyond just food, the organization even set mom and dad up with jobs at the main warehouse.

“I wasn’t expecting anything but a box of food but for all the rest, it was a blessing,” said Brian.

The Mills have just a few weeks to find new housing but Brian says at least he knows where their next meal will come from.

“I want to say to all those families that are out there in our same position, that don’t give up. There is hope. There are good people out there who still care,” said Brian.

In October, Feeding South Florida opened up the Choice Pantry to help families like the Mills.

They can literally ‘shop’ for fresh foods from grocery stores, free of charge. The food is donated by local grocery partners with the food bank. Click here for more information.

If you would like to donate or volunteer for Feeding South Florida this holiday season, click here.