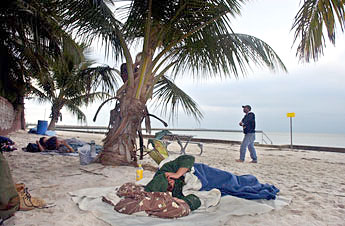 Monroe County is the seventh-worst county nationwide when it comes to income inequality, according to U.S. Census Bureau data.

In a report published Sept. 23, the Huffington Post, after crunching the numbers, found that Monroe has a median household income that is more than $6,000 above the state average and a population of about 76,000 people.

Using what’s called the Gini Index, which measures disparity between income brackets, it found Monroe scores a .5477. The scale ranges from 0 to 1.

Frank has researched income inequality nationwide. He said the Gini Index is broad because a county could have pockets of both wealthy and poor people — like the Keys do.

Still, Monroe County, despite having one of the lowest unemployment rates in the state at 3.9 percent, struggles with affordable, and available, housing.

United Way of the Florida Keys President Margie Smith, who will resign at the end of the year, summed up what most people know: The county is “dramatically short of housing.”

Smith also believes that the lack of an equal playing field, including access to early childhood education and a high number of jobs without benefits, is part of the “perfect storm” in the county.

Other social service providers are threading the waves, too.

Feeding South Florida, which distributes food to several food banks and soup kitchens across the Keys weekly, including St. Mary’s Soup Kitchen in Key West, has seen an uptick in demand.

“We have to consider looking at another route,” Feeding South Florida vice president of community relations Sari Vatske said. “We can easily provide another truck based on demand, but we don’t have the support for that vehicle at the moment.”

According to Feeding South Florida, Monroe County has the highest food cost index in South Florida, at $3.61 per meal, and almost 13 percent of its population is “food insecure.”

The Marathon-based Coldwell Banker Schmitt Charitable Foundation, which helps Keys residents with critical needs that are not met through other means, can be seen as the exception to the rule.

Between January and through September last year, it had 69 requests for help, which included housing and rental assistance. It only had 46 requests in the same period this year.

Foundation Chairwoman Jamie Martin said the requests are sporadic and are not even measurable by season.

However, she said a slightly better economy and the application process, which could take as long as eight weeks in some cases, could explain the decline.

Nonetheless, Monroe County is the worst in the state when it comes to income inequality according to the Gini Index.

Collier County, on Florida’s southwest coast, which includes cities such as Marco Island and Naples, has a Gini Index just a shade above 0.53. Neighboring Miami-Dade County has a Gini Index of almost 0.52.

The six counties more unequal than Monroe County, according to the Huffington Post’s research: