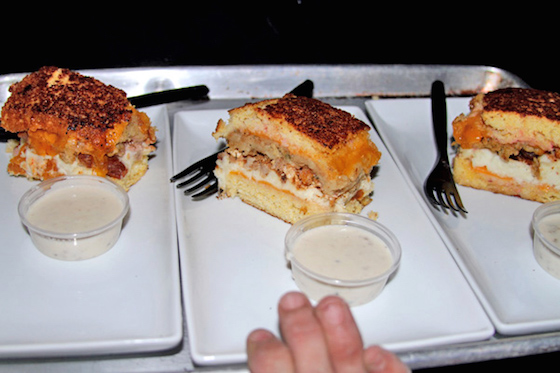 Don’t want to wait for Thanksgiving to stuff your face with turkey? Burger Beast is here to save the day.

This Saturday, more than 20 food trucks will gather at Magic City Casino for the third-annual Top Turkey Thanksgiving Dinner Challenge, where they’ll duke it out for bragging rights and a trophy emblazoned with a golden turkey.

Last year’s trophies went to Ms. Cheezious and Big Kahuna. The savory award went to a housemade smoked turkey, fontina cheese, caramelized onion, and pumpkin aioli melt on rosemary bread. The sweet award was given to a pumpkin-pie shake with candied pecans and pumpkin whipped cream. If that’s any indication about what to expect this year, you won’t want to miss this event — especially because admission is free.

For the past two years, Top Turkey has been held in Broward. It is now making its way to the location that Sef Gonzalez had in mind when he launched the event. It stems from his affinity for Thanksgiving sandwiches. The ideal Turkey Day concoction, he says, varies depending upon what he has left over the next day.

In the past, contenders have been selected by judges. This year, however, Burger Beast simply emailed the trucks he wanted to participate in the challenge and is giving them free rein to make whatever their thankful hearts desire.

Trucks will offer their full menus, so you can indulge in your favorite offerings from any of the attendees. “Last year we had two categories for winners — one sweet and one savory, but this year we’ve decided to just crown one person the Top Turkey,” Gonzalez says. So the heat is on.

Gonzalez has also joined forces with Feeding South Florida to help those in need this holiday season. Bring ten cans of food to the event and receive 10 percent off 15 of the participating trucks. “Hopefully we’ll be able to collect a lot of cans and help the community out.”

To do your part, simply head to Magic City Casino this Saturday anytime from 5 to 10 p.m. and get your turkey on.

Here’s a full list of the participating trucks and the items they’ll serve:

FOAR
Savory Dish: The Paco-hantas (Stuffing is mixed in with our Pancake Batter and formed as a Taco. The filling is Sweet Potato Puree, Turkey kept warm in Gravy, Cranberry Sauce, a sliver of melted Brie, a little more Cranberry and then either a drizzle or a few dots of Marshmallow on top).
Dessert Dish: The Fall Guy (Our regular Paco “Pancake Taco” with added Caramel to sweeten it up. The filling is Apple Butter Cream, fresh Apples sauteed in Butter & Cinnamon, our own wet Walnuts, Whipped Cream dusted with Cinnamon).

King of Racks BBQ
Savory Dish: Gobble Gobble Turkey Parfait (A Parfait layered with low and slow cooked Turkey, homemade Stuffing, our homemade Mash then drizzled in our Gravy). Served with our famous Cream of Corn.