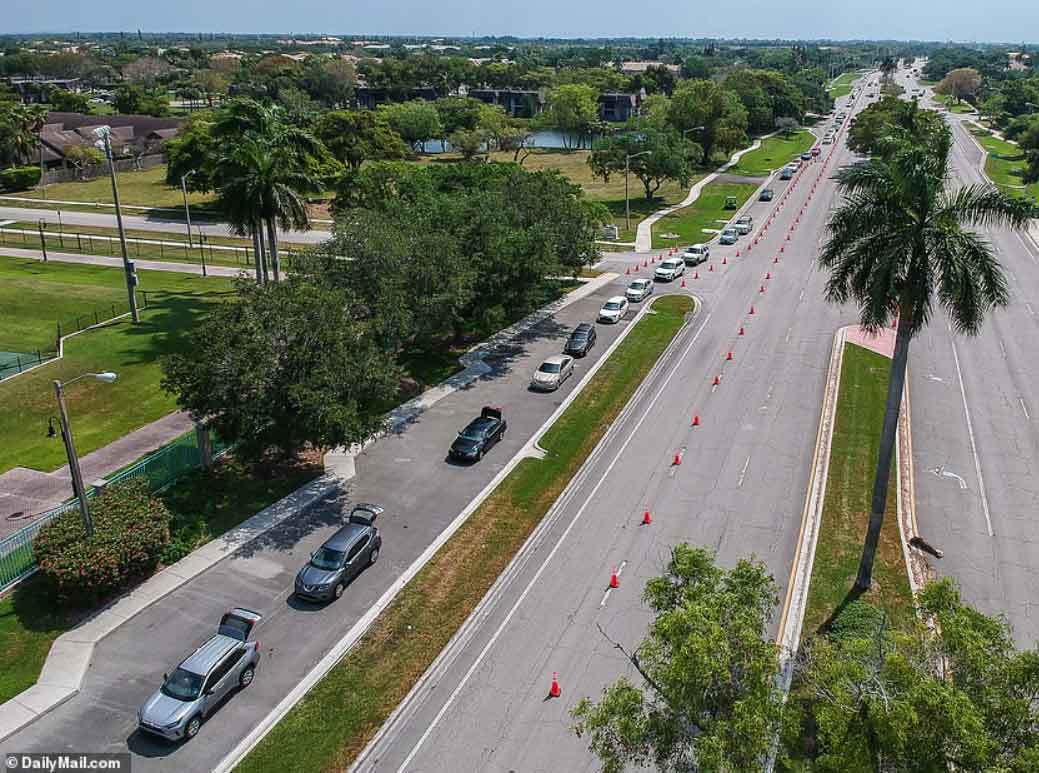 Exclusive DailyMail.com drone footage shows a 1.5 mile-long line of cars outside a drive-thru food distribution site in South Florida where thousands of people are seeking help to feed their families amid the coronavirus pandemic.

Hundreds of cars packed bumper to bumper on a roadway in Sunrise on Wednesday waiting to pick up essential food items from Feeding South Florida (FSF).

Similar long lines are cropping up around the Miami metro area on a daily basis as FSF holds dozens of distribution events to keep up with soaring demand from families hit hard by the COVID-19 crisis gripping the nation.

The organization said its seen a 600 percent increase in the number of people asking for food over the past couple weeks amid widespread layoffs affecting an estimated 500,000 Floridians.

The drive-thru at the Sunrise Tennis Club Park shown in DailyMail.com’s drone footage was one of six being held by FSF on Wednesday.

Organizers said they have already given out more than 10 million pounds of food in the past few weeks, providing roughly 2.5 million meals over each seven day period.

Keeping up with the massive demand has posed a challenge as the nation’s food supply chain experiences disruptions due to the pandemic.

‘As we go and look at purchasing product from our national relationships you see that there is a two week, three week, sometimes even a four week lag time,’ Velez said.

‘Some of the items we are looking at they tell us we won’t be able to get it until mid-May.’

But waiting weeks isn’t an option for FSF, so instead they’re focusing on supply from farmers.

Each car that passes through FSF distribution sites is given a crate of food, typically containing items such as milk, chicken, apples, tomatoes, cantaloupes and eggs.

Produce accounts for a large portion of the food being doled out by FSF and other charities across the nation.

That’s because the coronavirus outbreak has forced governments to shut down the hospitality industry, which includes restaurants, hotels, airlines, cruise ships, school cafeterias, and other businesses that serve food to customers.

That means farmers who rely on these businesses to buy their crops have an excess of perishable food and nothing to do with it.

Food that isn’t donated to food banks is simply thrown away or turned into mulch as there is no set mechanism to efficiently redistribute the excess produce to those in need.

‘The volume is at a level we’ve never seen before,’ said Stephen Shelley, president and CEO of Farm Share. ‘It is overwhelming the system.’

Farm Share distributes food every day through partnerships with food pantries, churches, school, and other nonprofits.

The organization has dozens of drop sites throughout Florida. It is running at maximum capacity using every one of its 25 refrigerated trucks and six warehouses to get food to those who need it.

More than 472,000 Floridians have applied for unemployment in the three weeks as the number of layoffs in the US topped 10 million.

Nationwide more than 6.6 million Americans applied for unemployment benefits at the end of last month – doubling a record high set just one week earlier – a sign that layoffs are accelerating in the midst of the coronavirus outbreak.

Mounting economic anxieties come as the coronavirus pandemic continues to claim the lives of hundreds of Americans each day, with at least 27,613 deaths and 633,380 cases reported as of Wednesday.