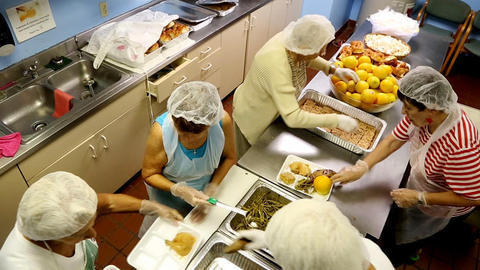 Concerned with the growing number of Floridians struggling to put nutritious yet affordable food on their tables, state lawmakers are weighing a proposal that would bring full-service stores to their neighborhoods.

Florida’s Healthy Food Financing Initiative would give low-cost loans to nonprofit organizations or for-profit businesses to put grocery stores in what the federal government calls food deserts. These are Census tracts where a percentage of residents have little money, live more than walking distance from a supermarket selling fresh food, but have no cars to drive to shop.

“The Hidden Hungry,” a Sun Sentinel report published in December, found there were 1.6 million people living in 326 food deserts in Miami-Dade, Broward and Palm Beach counties. And they were not just low-income urban neighborhoods were residents had been living on little for generations.

Some of South Florida’s retirement communities today are in food deserts, as seniors are more likely to outlive their incomes as they grow older. A third of the more than 240,000 South Floridians age 65 and older in food deserts are living alone, and about 40 percent have a disability, possibly making it difficult for them to cook, shop and drive.

Florida’s healthy food financing proposal would affect not only the elderly but anyone living in a food desert. The loans would finance new buildings or renovations for mom-and-pop groceries, re-purposed convenience stores, farmers markets or full-sized stores. Large grocery chains would not qualify for the initiative.

The Hidden Hungry: South Florida seniors struggle to put food on the table

Loan recipients must agree to allocate at least 30 percent of their retail space to perishable food like vegetables, fruit and meats; hire local residents if possible; and accept food stamps.

“This is not a giveaway; it’s a loan program.” said Sen. Aaron Bean, R-Jacksonville, sponsor of SB 760.

”We have identified 1,064 Florida stores currently selling cigarettes and beer that, with a little bit of help, could be selling fresh vegetables.”

The American Heart Association — which is working on healthy food initiatives nationwide through its Voices for Healthy Kids partnership with the Robert Wood Johnson Foundation — recruited Bean and Rep. David Santiago, R-Deltona, during the last session to be bill sponsors.

The association is promoting the proposal as a job generator as well good for community health. An average 46,000-square-foot grocery store could create an estimated 110 jobs, association officials said in a written statement.

On the health care side, initiative supporters say research shows residents living in communities where there is little fresh food available tend to have higher rates of obesity and chronic health care conditions like diabetes. The American Diabetes Association attributed more than $245 billion in health care costs to the disease in 2012.

SB 760 and its House companion, HB 153, have yet to make it to the House or Senate floor, but David Francis, government relations director for the American Heart Association in Florida, said he is “cautiously optimistic.”

“Sometimes, it takes a while to sell a new idea,” Bean said.

Jaime Estremera-Fitzgerald, CEO of Your Aging and Disability Resource Center in West Palm Beach, said the initiative could offer new ways to serve South Florida seniors facing health and transportation problems. Federally subsidized meals on wheels programs in Palm Beach and Broward have between 600 and 700 people on their waiting lists.

“A lot of homebound seniors are unable to drive. I think this incentive could bring community markets closer to them,” said Estremera-Fitzgerald, whose agency oversees aging services for five Florida counties, including Palm Beach.

Besides selling groceries, the Feeding South Florida market could be a hub for food stamp counseling and nutritional education, Velez said. “It’s one thing to get access to nutritious food, another if you then go home and deep-fry it,” he said.

Community markets also could be outlets for local growers to distribute their produce, he said.

Julia Koprak, senior associate at The Food Trust, said state healthy food financing legislation tends to gain bipartisan support “because they both improve healthy food access by bringing fresh food to communities that need it the most, and bring jobs to those communities as well.”

The Food Trust, a nonprofit founded 20 years ago to promote healthier communities through better food , helped launch the nation’s first such project, in Philadelphia, in 2004. There are healthy food financing programs in about 12 cities and states, Koprak said, and both Ohio and Alabama have passed initiative legislation within the past year.

Federal healthy food financing dollars have been available since 2010. And some states have created their own financing pools, such as what Florida is now considering.

Florida’s bill calls for $5 million in state seed money, with the project to be re-evaluated after three years, Bean said. The initiative would be overseen by a third-party nonprofit, with loan repayments replenishing the fund so more stores can be financed.

“Some people have lived a long time with access only to fast food,” Sporte said. “You can’t start seeing change until you have a green pepper to buy. It will take years to play out, but I think we will see gradual improvement in obesity and heart disease.”